Raine Adrian - The anatomy of violence 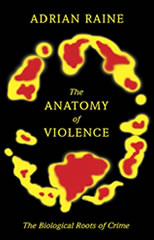 Preface. It’s July 19, 2012, and it’s as hot as the hobs of hell here in Philadelphia. The air-conditioning in my work office conked out, so I came home to an airy upstairs library room to write this preface. I should have been filming a crime documentary this afternoon with a crew from Chicago, but they had their equipment stolen this morning. That’s not a surprise, though, as crime strikes all the time here in Philadelphia. Yesterday, I was dealing with two police detectives - Lydon and Boyle - here at my house, which had been burgled yesterday. Just what you want when you come back after midnight from Hong Kong. But I live close to my data, which is one reason I reside here in West Philadelphia. Looking around this upstairs library, I’m surrounded by hundreds of rare-edition books on crime and violence that the burglar didn’t take. I suppose he’s not as interested as we are in what causes crime. They’re not my books, mind you. They belong to the people who lived here during the seventy-year period before I moved in. Most belong to Marvin Wolfgang, a world-renowned criminologist who, beginning in 1969, sat and wrote in this very library room. For the thirty years before that, Thorsten Sellin, another world-leading criminologist and Wolfgang’s PhD supervisor, lived here, having bought the house just seven weeks before the outbreak of World War II. I am at his desk. For three-quarters of a century between the two of them—professor and mentor - these intellectual giants in sociology redefined the field of criminology at the University of Pennsylvania, where I myself now work. ...