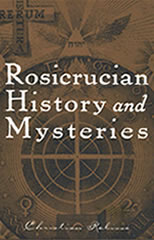 Introduction. One of the Western world’s most enigmatic initiatory societies is the Rosicrucian Order. Goethe once asked, “Who then has wedded the rose to the cross?” Indeed, the Order’s symbol unites two elements of opposing essence: the cross, whose four branches recall the four cardinal points, symbolizes the material world, whereas the rose, whose subtle perfume represents the unknowable aspect of things, represents the soul. The Rose Cross thus represents the mystery of the conjunction of contraries, the marriage of body and soul. Yet the Rose Cross is not only a symbol relating to human evolution; it also concerns the whole of Creation. During the 17th century, the golden age of Rosicrucianism, people readily perceived in the wedding of the rose and cross the process by which humans help nature to find its own regeneration. This is undoubtedly what Joséphin Péladan wanted to express in the motto appearing on the cover of one of his books: Ad rosam per crucem, ad crucem per rosam, in ea, in eis gemmatus resurgam. “To the rose by way of the cross, to the cross by way of the rose, in it the rose, in them the rose and cross, I emerge once more as a precious stone.” Through the marriage of the rose and cross—of human beings and creation—the Divine reveals itself in increasingly brilliant splendor. These few elements help us to understand the attraction that the Rose Cross symbol has exerted for centuries upon so many seekers who have reflected upon the mysteries of God, humanity, and the universe. ...