Steed Henry Wickham - A short history of Austria-Hungary and Poland 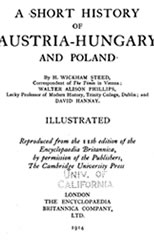 Introduction. AUSTRIA-HUNGARY, or the Austro-Hungarian Monarchy (Ger. Osterreichisch-ungarische Monarchie or Osterreichisch-ungarisches Reich), is the official name of a country situated in central Europe, bounded E. by Russia and Rumania, S. by Rumania, Servia, Turkey and Montenegro, W. by the Adriatic Sea, Italy, Switzerland, Liechtenstein, and the German empire, and N. by the German empire and Russia. It occupies about the sixteenth part of the total area of Europe, with an area (1905) of 239,977 sq. m. The monarchy consists of two independent states : the kingdoms and lands represented in the council of the empire (Reichsrat), unofficially called Austria or Cisleithania, because its territories lie west of the river Leitha ; and the " lands of St Stephen's Crown," unofficially called Hungary or Transleithania, i.e. across the Leitha. ...