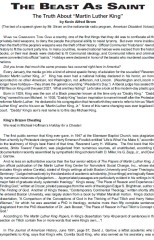 WHEN THE COMMUNISTS TOOK OVER a country, one of the first things that they did was to confiscate all the privately-held weapons, to deny the people the physical ability to resist tyranny. But even more insidious than the theft of the people’s weapons was the theft of their history. Official Communist “historians” rewrote history to fit the current party line. In many countries, revered national heroes were excised from the history books, or their real deeds were distorted to fit Communist ideology, and Communist killers and criminals were converted into official “saints.” Holidays were declared in honor of the beasts who murdered countless nations. Did you know that much the same process has occurred right here in America? Every January, the media go into a kind of almost spastic frenzy of adulation for the so-called “Reverend Doctor Martin Luther King, Jr.” King has even had a national holiday declared in his honor, an honor accorded to no other American, not Washington, not Jefferson, not Lincoln. (Washington and Lincoln no longer have holidays— they share the generic-sounding “President’s Day.”) A liberal judge has sealed the FBI files on King until the year 2027. What are they hiding? Let’s take a look at this modern-day plastic god. Born in 1929, King was the son of a Black preacher known at the time only as “Daddy King.” “Daddy King” named his son Michael. In 1935, “Daddy King” had an inspiration to name himself after the Protestant reformer Martin Luther. He declared to his congregation that henceforth they were to refer to him as “Martin Luther King” and to his son as “Martin Luther King, Jr.” None of this name changing was ever legalized in court. “Daddy” King’s son’s real name is to this day Michael King. ...