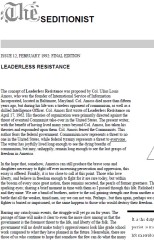 The concept of Leaderless Resistance was proposed by Col. Ulius Louis Amoss, who was the founder of International Service of Information Incorporated, located in Baltimore, Maryland. Col. Amoss died more than fifteen years ago, but during his life was a tireless opponent of communism, as well as a skilled Intelligence Officer. Col. Amoss first wrote of Leaderless Resistance on April 17, 1962. His theories of organization were primarily directed against the threat of eventual Communist take-over in the United States. The present writer, with the benefit of having lived many years beyond Col. Amoss, has taken his theories and expounded upon them. Col. Amoss feared the Communists. This author fears the federal government. Communism now represents a threat to no one in the United States, while federal tyranny represents a threat to everyone . The writer has joyfully lived long enough to see the dying breaths of communism, but may, unhappily, remain long enough to see the last grasps of freedom in America. ...