Trumper Victor L. - The mirror of Egypt in the old testament 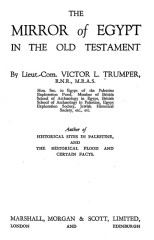 Preface. The following pages have been written in the hope that they will be interesting to all who have the slightest desire for a fuller understanding of Scripture, and who may be interested in the land of Egypt, where the relics of antiquity throw such a vivid light on the allusions to Egypt in Holy Writ. I am fully aware in entering this field, that I am treading a path where men with vastly more knowledge have gone before. Nevertheless, I feel that there is room for such a book as this, in which I have tried to avoid the Scylla of facts drily presented, and the Charybdis of homiletic declamation. In other words, while not in the least minimising the Divine Element and Inspiration permeating the whole of the Book, I have endeavoured to show the human and practical side, as a means to a fuller understanding of the narratives, in the same way as one might study the social life and conditions in Palestine in the early decades of our era, for the better understanding of the human side of Our Lord's life. I have spent over twenty years in Egypt, during which time I have constantly been on the, watch for facts and incidents tending to throw light on Scripture. However, the writing of this book would have been impossible without the help and encouragement of Mr. W. W. Skeat, M.A., of the staff of the British Museum, who has rendered ungrudging service in gathering facts, verifying quotations, making suggestions, and at times curbing a too exuberant positiveness on the part of the writer. I have endeavoured to give chapter and verse for all quotations from other writers, so that all references can be verified. Also I have tried to carefully distinguish facts from probabilities and surmises, so that the reader can form his own judgment. All quotations of Scripture are from the Revised Version, unless specially stated to the contrary. ...