Vallée Jacques - Wonders in the sky 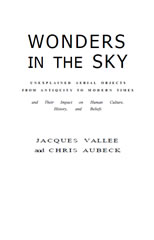 Foreword by David J. Hufford, Ph.D. Professor Emeritus of Humanities and Psychiatry. Penn State College of Medicine. Adjunct Professor of Religious Studies. University of Pennsylvania. Author, The Terror That Comes in the Night. In 1969 I was a graduate student at the University of Pennsylvania, pursuing a Ph.D. in the field of Folklore. My primary interest was in what was called "folk belief." This term was, and still is, generally reserved for beliefs that are at odds in some way with the official modern worldview. I was taught that such beliefs were both non-empirical and nonrational, that they were cultural fictions that reflected local concerns and functioned to support community values and psychological needs. The experiences on which they claimed to be based were, to use the term popularized by Thomas Kuhn's landmark work, The Structure of Scientific Revolutions (1962), "anomalies." ...