Velasco Eduardo - Sparta and its Law 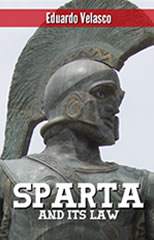 Introduction. O blessed remote period when a people said to itself: "I will be - master over peoples!" For, my brothers, the best shall rule, the best also wills to rule! And where the teaching is different, there - the best is lacking. - F. W. Nietzsche, Thus Spoke Zarathustra. Sparta was the first massive reaction against the inevitable decline brought about by the comfort of civilization, and as such, there is much to learn from it in this age of biological and moral degradation induced by a techno-industrial society. The Spartans really broke away from all vices produced by civilization, and so placed themselves at the top of the pyramid of power in their region. All current elite military traditions are somewhat heirs of what took place in Sparta, and this signals the survival of the Spartan mission. In this book we have gathered data from various sources, giving priority to the classics. The historian and priest of the sanctuary of Apollo at Delphi, Plutarch (46-125 CE), in his work Ancient Customs of the Spartans and Life of Lycurgus gives us valuable information about Spartan life and Spartan laws, and much of what we know about Sparta we owe to him. Xenophon (430-334 BCE), historian and philosopher who sent his children to be educated in Sparta, is another good source of information, in its Constitution of the Lacedaemonians. Plato (427-347 BCE), in his famous Republic shows us the concept of how a higher state should be ruled, listing many measures that seem directly taken from Sparta, because it was his inspiration. ...