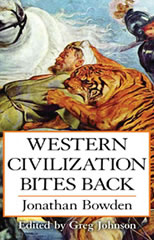 Editor's foreword. Western Civilization Bites Back collects transcripts of seven lectures by Jonathan Bowden, supplemented by two shorter published pieces and the transcript of Jonathan’s last interview. As with all of Jonathan’s works, these pieces range as far and wide as his vast learning, powerful imagination, and genius for seeing connections could take him. But I have strung them together on a common thread: Bowden’s conviction that the crisis of the white race is ultimately moral, both in cause and in cure. The moral cause is the dominant Christian and liberal values system which elevates weakness over strength, equality over excellence, humility over pride, the guilty conscience over the innocence of becoming. This moral programming has been used to demoralize and dispossess whites not just for our many collective crimes and mistakes but also for our greatness: for the beauty of our people and their magnificent achievements in philosophy and letters, art and architecture, science and technology, exploration and statesmanship - excellences which other races seldom equal and scarcely ever surpass. Christian and liberal values have never been consistent with biological flourishing and cultural greatness, and their dominance has led, inexorably, to whites being essentially “talked out” of planetary dominance and onto the path of extinction within the span of less than a century - an astonishing reversal of fortunes in a historical blink of the eye. Talk of equality and pity led, first, to a pervasive lowering of standards and the raising - even privileging - of the marginalized within white communities. Then the same moral pleading was used to bring about the inclusion, equality, and eventual hegemony of Jews and other non-whites within our societies. Once Jews gained sufficient control over education, culture, and the mass media, the path from white guilt to white dispossession has been immensely accelerated. Even the massive use of coercion to advance white dispossession - for example, the American Civil War, the Bolshevik Revolution, the Second World War, and the pervasive drive to criminalize ethnocentric speech and thought throughout white societies - could not have happened before whites - specifically elite whites in positions of power and influence - had been essentially talked into them on moral grounds. ...