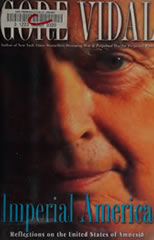 Following the publication of Perpetual War for Perpetual Peace and its sequel Dreaming War, Gore Vidal was described as the last "noble defender" of the American republic, America's last "small-r" republican. In Imperial America, the conclusion of this landmark trilogy and his most devastating exploration of contemporary America yet, Vidal observes that there's something suspicious about the "ever reckless Cheney-Bush junta." ...