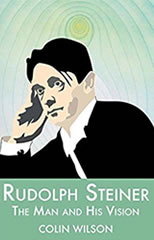 The Door to the Inner Universe. Of all the important thinkers of the twentieth century, Rudolf Steiner is perhaps the most difficult to come to grips with. For the unprepared reader, his work presents a series of daunting obstacles. To begin with, there is the style, which is formidably abstract, and as unappetizing as dry toast. But a determined reader could learn to put up with that. The real problem lies in the content, which is often so outlandish and bizarre that the reader suspects either a hoax or a barefaced confidence trick. Books like Cosmic Memory , with its account of Atlantis and Lemuria, seem to belong on the same shelf as titles like Our Hollow Earth , or My Trip to Venus in a Flying Saucer . The resulting sense of frustration is likely to cause even the most open-minded reader to give up in disgust. This was, I must admit, my own experience when the publisher of the present volume approached me in the mid-1970s and asked me to write a book on Steiner. I accepted because I had always found Steiner an interesting figure. I first came upon his name in my early teens; it was in a remarkable book called God Is My Adventure , by Rom Landau. Landau begins his account by describing the experience of a certain Baron V—, a German officer with whom the author became acquainted during his student days in Warsaw. The Baron was a member of a flying corps on the western front in the First World War, and he developed a disturbing psychic faculty: the ability to foretell which of his comrades would be killed when they flew out on a mission. This gift of prophecy threatened to wreck his health, so when he was advised to go and see a certain Dr Rudolf Steiner, he seized the idea with relief. Dr Steiner proved to be a quiet man with deep-set eyes, and he advised the baron to practise certain simple mental disciplines. These had the desired effect, and the unnerving gift vanished. Landau’s account made it clear that Steiner was no charlatan messiah; whenever people met this calm, serious man and heard him speak quietly and sensibly about the ‘spirit world’, they felt he was speaking from direct experience. Over the years, I had picked up many copies of Steiner’s books in second-hand shops. I had dipped into them, but found the style off-putting. I promised myself that one of these days I would settle down to a systematic study of Steiner’s ideas, and the publisher’s offer seemed to be the opportunity I had been waiting for. So I accepted, and blew the dust off the dozen or so volumes of Steiner on my bookshelves. ...