Wolff Michael - The man who owns the news 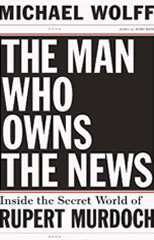 Author : Wolff Michael
Title : The man who owns the news Inside the secret world of Rupert Murdoch
Year : 2008

Acknowledgments. It’s important to get lucky when you write a book. My first stroke of good fortune happened when my daughter Elizabeth introduced me to her colleague Leela de Kretser, a reporter at the New York Post. My next stroke was that Leela was extremely pregnant and looking for a job with more flexible hours for after her baby’s birth. My next was that before the Post, Leela had been a reporter at the Herald Sun, Murdoch’s paper in Melbourne, where she grew up. An Aussie who’s worked for two Murdoch papers to help with the research for a book about Murdoch-that’s striking gold. My good luck has again and again been compounded by her keen perceptiveness about all things Murdoch, her fine-tuned interviewing skills, her in-the-trenches knowledge of the news business, and her unflagging humor. In twelve months we have done more than 120 interviews together, crossed Australia, and sat for more than fifty hours with the book’s subject. It may take an Australian to know one. Leela has talked out every aspect of the book with me, been as acute an analyst of News Corp.’s customs as anyone I’ve consulted, and somehow made all the trains of this project run on time. This book rests as much on her shoulders as my own-the mistakes will have undoubtedly come in those instances where I ignored her warnings and advice. My friend of twenty years, Christopher Silvester, a Fleet Street diarist of long standing, helped track down old Murdoch hands in London, convince a wide assortment of Murdoch’s current British friends and foes to chat about him, assemble the surprisingly large body of Murdoch literature, skillfully conduct some of the notable background interviews for the book, and read the manuscript with patience and a keen eye. Simon Dumenco, who may well have edited as many words of mine as any editor has for any writer, read this manuscript with the greatest care and offered the wisest of counsel, saving me from countless instances of excess and embarrassment. This project began in the summer of 2007 in a column I wrote for Vanity Fair about the Dow Jones takeover. My VF colleague Doug Stumpf was the first to see the possibilities for this material as the basis of a book and urged me forward. VF’s editor, Graydon Carter, provided some of the initial insights that form the portrait of a new and evolving Murdoch. All of my colleagues at the magazine have been extraordinarily supportive of the project-and tolerant of my obsession with KRM. My editor at Random House, Phyllis Grann, and her colleagues Steve Rubin, Bill Thomas, David Drake, Kathy Trager, and Jackeline Montalvo have been enthusiastic, discerning, and smart publishers-and fast, too, turning around a complicated manuscript on a relative dime. Their colleagues in London, Gail Rebuck and Dan Hind, have also worked with speed and good humor. Dan deserves special thanks for helping me through that most galling, pernicious, and absurd literary process: a British libel read. ...