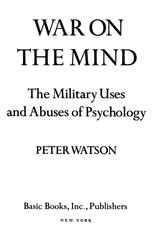 Author : Watson Peter
Title : War on the mind The military uses and abuses of psychology
Year : 1978

Preface. To most of us 'the military uses of psychology' means first and foremost propaganda. At some time or another we have all heard of the leafletting operations carried out in recent conflicts - such things as safeconduct passes dropped by the million from aircraft. Similarly, both the overt and covert activities of propaganda radio stations during the Second World War have received their share of publicity. Even the efforts of armies (principally of the western powers) to influence the 'hearts and minds' of their potential adversaries by such propaganda exercises as building bridges, installing plumbing and so on, have become a familiar sight in contemporary news-clippings. Outside the field of propaganda the work of psychologists in helping to ensure that the design of tanks, helicopters, gun-sights and radar screens takes into account the limitations and variations in human abilities has received some notice, as have attempts to improve selection procedures. But in the military context the work of psychologists has generally taken a back seat in comparison with that of other scientists. Their results, set beside the achievements of physicists, mathematicians and biologists, have often seemed to be small, uninteresting and their effectiveness, in the nature of things, difficult to assess. ...