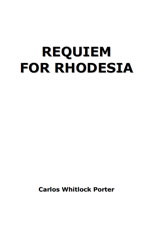 Urge neither charity nor shame to me: Uncharitably with me have you dealt, And shamefully by you my hopes are butcher’d. - Shakespeare. I have set my life upon a cast, And I will stand the hazard of the die. - Shakespeare. The Rhodesian Railways train stops for water in the desert. Crowds of ragged Africans mob the train, running hysterically to any white face in the window. “Please one penny, baasjie (bossie), please give me just one penny”, whimpers a filthy child with a swollen belly and bony limbs, barely old enough to walk. Someone throws him a coin. He is beaten viciously and the penny snatched. In the distance stand thousands of windowless tin shacks, like tool sheds, against a boiling plain after a freezing night; this is a government housing project. Hundreds of other shacks built of trash, paper, and bits of tin, have rocks on the roof to keep them from blowing away. No visible paved roads; few roads of any kind. Scores of teenage prostitutes and hoodlums lounge amongst the filth, coming on board the train to use the toilets. Trash everywhere. Not a white man in sight. Is this Rhodesia? No. This is Botswana, Black Africa. Bush, desert, now trees, an unchanging landscape of monotony and misery. Suddenly a modern gasoline station appears: like a laboratory experiment showing the effect of an invisible line drawn on a map. Suddenly the roads are paved; the Africans are well dressed and muscular, walking about seemingly unconcerned. No shacks. No trash. No begging. ...