Hoffman II Michael A. - Judaism Discovered From Its Own Texts 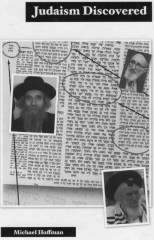 Author : Hoffman II Michael A.
Title : Judaism Discovered From Its Own Texts A Study of the Anti-Biblical Religion of Racism, Self-Worship, Superstition and Deceit
Year : 2008

"The Jews as... well as the National Socialists want to impose on God their plans for the glory of their race and nation... And both these forces are being used by Satan to inflict disaster on the world. There is laughter in hell when human beings succumb once more to the temptation of the Garden of Eden and put themselves in the place of God, whether the new divinity be the Jewish race or the German race." Rev. Fr. Denis Fahey The Mystical Body of Christ and the Reorganization of Society (1939) ...