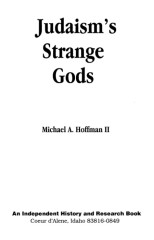 In this scholarly and deeply considered work, the author documents his provocative thesis that Judaism is not the religion of the Old Testament, but the newly formalized belief system of the Pharisees, which arose in Babylon with the commitment of the formerly oral "tradition of the elders" to writing, in the wake of the crucifixion of Israel's Messiah and the destruction of the Temple. Basing his findings on authoritative Judaic sources, Hoffman demonstrates that Judaism is a man-made religion of tradition and superstition, which represents the institutionalized nullification of Biblical law and doctrine. Liberating the reader from the accumulated shackles of decades of misinformation, this book shows that Judaism's God is not the God of Israel, but the strange gods of Talmud and Kabbalah, and the racial self-worship they inculcate. Making a relentless case with massive documentation and a lapidary attention to detail, Judaism's Strange Gods constitutes a shocking and original revelation about a subject we thought we knew only too well. Michael A. Hoffman II was educated at the State University of New York at Oswego. He is a former reporter for the New York bureau of the Associated Press and the author of several books, including Secret Societies and Psychological Warfare and The Great Holocaust Trial. ...