Hoffman II Michael A. - Critchley Alan R. - The Truth About The Talmud 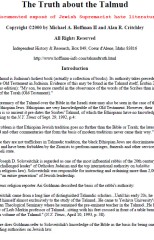 Introduction. The Talmud is Judaism's holiest book (actually a collection of books). Its authority takes precedence over the Old Testament in Judaism. Evidence of this may be found in the Talmud itself, Erubin 21b (Soncino edition): "My son, be more careful in the observance of the words of the Scribes than in the words of the Torah (Old Testament)." The supremacy of the Talmud over the Bible in the Israeli state may also be seen in the case of the black Ethiopian Jews. Ethiopians are very knowledgeable of the Old Testament. However, their religion is so ancient it pre-dates the Scribes' Talmud, of which the Ethiopians have no knowledge. According to the N.Y. Times of Sept. 29, 1992, p.4: "The problem is that Ethiopian Jewish tradition goes no further than the Bible or Torah; the later Talmud and other commentaries that form the basis of modern traditions never came their way." Because they are not traffickers in Talmudic tradition, the black Ethiopian Jews are discriminated against and have been forbidden by the Zionists to perform marriages, funerals and other services in the Israeli state. Rabbi Joseph D. Soloveitchik is regarded as one of the most influential rabbis of the 20th century, the "unchallenged leader" of Orthodox Judaism and the top international authority on halakha (Jewish religious law). Soloveitchik was responsible for instructing and ordaining more than 2,000 rabbis, "an entire generation" of Jewish leadership. ...