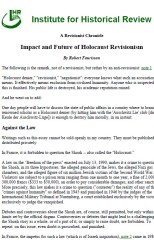 The following is the remark, not of a revisionist, but rather by an anti-revisionist: note 1 "Holocaust denier," "revisionist," "negationist": everyone knows what such an accusation means. It effectively means exclusion from civilized humanity. Anyone who is suspected of this is finished. His public life is destroyed, his academic reputation ruined. And he went on to add: One day people will have to discuss the state of public affairs in a country where to brand a renowned scholar as a Holocaust denier (by hitting him with the 'Auschwitz Lie' club die Keule der Auschwitz-Lüge) is enough to destroy him morally, in an instant. Against the Law Writings such as this essay cannot be sold openly in my country. They must be published and distributed privately. In France, it is forbidden to question the Shoah -- also called the "Holocaust." A law on the "freedom of the press" enacted on July 13, 1990, makes it a crime to question the Shoah, in its three hypostases: the alleged genocide of the Jews, the alleged Nazi gas chambers, and the alleged figure of six million Jewish victims of the Second World War. Violators are subject to a prison term ranging from one month to one year, a fine of 2,000 to 300,000 francs ($333 to $50,000), an order to pay considerable damages, and other sanctions. More precisely, this law makes it a crime to question ("contester") the reality of any of the "crimes against humanity" as defined in 1945 and punished in 1946 by the judges of the International Military Tribunal at Nuremberg, a court established exclusively by the victors exclusively to judge the vanquished. Debates and controversies about the Shoah are, of course, still permitted, but only within the limits set by the official dogma. Controversies or debates that might lead to a challenging of the Shoah story as a whole, or of a part of it, or simply to raise doubt, are forbidden. To repeat: on this issue, even doubt is proscribed, and punished. ...