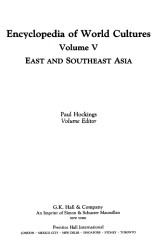 The national motto of the Indonesian republic, "Bhineka tunggal ika" (Unity amid Diversity), could well stand as the theme of this introductory essay. The diversity, not just of Indonesia but of the whole realm of tropical and subtropical Asia, is quite apparent as one reads through the many dozens of descriptive accounts published here and in the volume on South Asia. Some groups are tiny, while others number in the millions; some are maritime, while others live high in the mountain ranges; some have long flourished in the mainstream of major Eastern civilizations, while others are so remote that they have been effectively cut off from any civilizational influence until the present century, by geography if not by preference. ...