Hitler Adolf - Speech delivered by Adolf Hitler before the German Reichtag on january 30, 1939 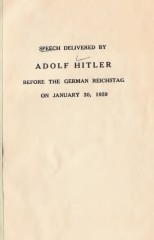 Members of the German Reichstag, When six years ago on this evening tens of thousands of National Socialist fighters marched through the Brandenburg Gate to the light of their torches to express to me who had jnst been appointed Chancellor of the Eeich, their feeling of overwhelming joy and their vows as faithful followers, countless anxious eyes all over Germany and in Berlin gazed upon the beginning of a development, the end of which still seemed unknown and unpredictable. Approximately thirteen million National Socialist voters then supported me. This was a tremendous number but still only a little over a third of all the votes cast. It is true that the other twenty million had been scattered and split up among approximately thirty-five other parties and little groups. ...