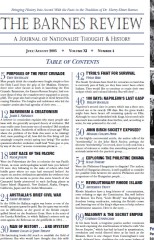 5 PURPOSES OF THE FIRST CRUSADE TROY SOUTHGATE Most people think the crusades were fought simply to free the Holy Land from the grip of the Muslims. However, there were other factors at work in launching the First Crusade. Byzantium, the Eastern Roman Empire, had contrary ideas of what the crusaders were supposed to accomplish. The pope also had certain goals in mind beyond liberating Palestine. The knights and noblemen who led the crusader armies also had agendas of their own. . . . 12 DARWINISM & CREATIONISM JAMES I. NIENHAUS A believer in creationism explains why many people take issue with the generally accepted theory of evolution. Did man really come from some sort of monkey? Did monkeys start out as fishes, hundreds of millions of years ago? What about the problem of the links that seem to be missing? And, most puzzling of all, how did the first living cell (an amazingly complex entity) spring into being? The author questions whether evolution could lead “from goo to you, by way of the zoo,” as some creationists phrase it. . . . 18 LOST RACE OF THE PACIFIC FRANK JOSEPH Were the Polynesians the first to colonize the vast Pacific Ocean, as most anthropologists would have you believe? Or were they following in the wake of others who had boldly gone where no man had ventured before? An expert on ancient civilizations assembles the evidence into one article that seems to prove that some branch of the Caucasoid family pioneered in such far-flung places as Easter Island (Rapanui), New Zealand, Alaska, Oregon, California, Japan and the Andes Mountains. . . . 24 AUSTRALIA’S BRIEF CIVIL WAR GEOFF MUIRDEN In the 1850s the Ballarat region was home to one of the world’s greatest quests for gold. But the quest was not without its difficulties, as the greed of the British empire spilled blood on the Southern Cross. Here is the story of the Eureka Rebellion, in which Ballarat’s miners took up arms against the Redcoats on the goldfields in 1854. . . . 30 MAN OF HISTORY . . . AND MYSTERY ROBERT LOGAN & JOHN TIFFANY His fascinating books did much to establish the field of prehistory. But who would have thought that this mildmannered professor, Dr. Ivar Arthur Nikolai Lissner, led a double life as a daring spy? . . . 36 WHAT REALLY SANK RUSSIAN SUB? JOHN NUGENT Many conflicting stories have been put forth about the strange fate of the doomed Russian submarine Kursk. But the truth seems to be leaking out at last. Did America sink the Russian sub, using an MK-48 torpedo? . . . 42 TYROL’S FIGHT FOR SURVIVAL VIVIAN BIRD The South Tyroleans have lived for centuries on land that is currently part of Italy, yet they have never been ethnic Italians. They would like to continue to retain their own unique ethnic and cultural identity. But will they? . . . 46 100 DAYS: NAPOLEON’S LAST GASP PHILIPP BOUHLER Napoleon’s second time in power, which was a short one, turned out to be exactly 100 days. But the great leader might have been better off remaining quietly on Elba. Although he once hobnobbed with kings, his second exile was much less comfortable than his first, and, according to some, he was poisoned in the end. . . . 50 JOHN BIRCH SOCIETY EXPOSED? MICHAEL COLLINS PIPER In this highly controversial article, the author tells of his “membership” in the John Birch Society, perhaps the shortest “membership” on record, since it only took him a matter of minutes to realize that something seemed to be seriously amiss with the patriotic group. . . . 54 EXPLORING THE PHILISTINE ENIGMA SUSAN TOMORY Were the Philistines Hungarians in disguise? The author, herself of Hungarian descent, is well qualified to consider the possible links between the ancient Philistines and the progenitors of the Hungarian people. . . . 65 REVOLUTIONARY RHODE ISLAND ABSTEMIOUS TROUT Rhode Islanders have a long history of contrarianism, even refusing to sign the Constitution. But well before the Boston Tea Party, “Little Rhody” was displaying its freedom loving tendencies, resisting the British crown and burning one of the king’s ships sent to help enforce burdensome taxation. Here is the story. . . . 69 MASONRY & THE SECRET EMPIRE CUSHMAN CUNNINGHAM In his latest book, a longtime patriot author continues his work exposing the machinations of what he calls “the Secret Empire,” which has had its hand in assassination, revolution and social discord since as far back as the Khazars. Here is one chapter from Cunningham’s new book, debuted here, clarifying the role some lodges of Freemasonry have played in “the Secret Empire.” . . . 72 BRITAIN’S WAR GUILT JOSEPH GOEBBELS Hitler’s propaganda minister was a master of words and imagery. Here TBR presents Goebbels at his best as he lays out his case for Britain’s responsibility for the expansion of the European conflict that turned into World War II. How could it have been avoided? . . . ...