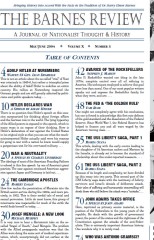 4 ADOLF HITLER AT NUREMBERG 20 WAFFEN SS GEN. LEON DEGRELLE This is not an article about the so-called “trial” of Nazi war criminals in 1945-6, but rather a triumphal piece about the ability of Adolf Hitler to mobilize an entire country. His rallies at Nuremberg inspired the German people and are still greatly admired by politicians and public speakers today. . . . 10 HITLER DECLARES WAR A SPEECH BY ADOLF HITLER There is no question that Hitler’s speech on this occasion summarized his thinking about foreign affairs and the German role in the world. The lying hypocrisy of the Allied powers is exposed in this speech, which in many ways is an expose of their thinking. Here is Hitler’s declaration of war against the United States in its original style so that you can see what the muchmisinterpreted Hitler actually said were his reasons for going to war with a nation he knew would supply a gargantuan test for his over-taxed military. . . . 20 WAR & NEUTRALITY A SPEECH BY CHARLES LINDBERGH The ideology of most of the American Founding Fathers is echoed in this fine speech by one of America’s great patriots. The case against continued American aggression against Japan and Germany is laid out. . . . 24 THE CAMBRIDGE APOSTLES ROBERT LOGAN How few realize the penetration of Marxists into the British secret service during the 1930s, and more precisely, in 1932. This is their sordid tale of social and sexual perversion. Little do most know, this group of miscreants was responsible for much of the strife the world finds herself in today. . . . 30 JOSEF MENGELE: A NEW LOOK MICHAEL MURPHY It is very rare to hear a Revisionist take on the socalled “Angel of Death,” Josef Mengele. The problem with the Allied propaganda machine was that the Allies were doing the same sort of medical experimentation, which, unsurprisingly, did not surface at the Nuremberg hearings where Mengele was tried. . . . 36 RHODES & HIS SCHOLARSHIPS MICHAEL COLLINS PIPER The Rhodes scholarship is not merely a prestigious reward for excellence in scholarship, but is agenda driven. The agenda is the reuniting of England with the United States. Here’s the proof. . . . 42 AVARICE OF THE ROCKEFELLERS STEPHEN J. MARTIN John D. Rockefeller wanted one thing in the late 1870s: complete control over all oil refining in America.His techniques employed to achieve this goal were less than moral. One of our most popular writers speaks out and exposes the Rockefeller family for what they were, and are. . . . 48 THE FED & ‘THE GOLDEN RULE’ TOM ROSE One might not completely agree with his conclusions, but one is forced to acknowledge this first rate defense of the gold standard and the dissolution of the Federal Reserve. Since World War I, the Federal Reserve has helped to finance any and all wars waged by the American ruining class. . . . 55 THE USS LIBERTY SAGA, PART 1 ROMEO STANA This article, dealing with the early events leading to the slaughter of 34 American sailors and Marines by the Israelis, is already set to become the standard of scholarship about this under-reported massacre. . . . 61 THE USS LIBERTY SAGA, PART 2 ROMEO STANA Because of its length and complexity, we have divided up this essay into two parts. This second part of the USS Liberty saga deals with the testimony of Liberty survivors and Israel’s denials of deliberate attack. Their tales of suffering and bureaucratic stonewalling will shock those who still believe the attack was a “mistake.”. . . 70 JOHN ADAMS TAKES OFFICE A SPEECH BY JOHN ADAMS Here, reprinted as primary source material, is the position of the Federalists in the young years of the republic. He deals with the growth of government power, the power of the states and the rightness of the Constitution against the attacks of the anti-Federalists. This is extremely important American history. One wonders why it is rarely read. . . . 74 WHO WAS ANTONIO GRAMSCI? JOSEPH CROSSON Antonio Gramsci is one of the world’s famous communist agitators. Few of our modern perversions are innocent of his hands yet people still admire him. This is a brief, but effective, summary of his thought and development, more specifically against the anti-communist Church of Rome which stood in the way of “bolshevization” of the western world. . . . ...