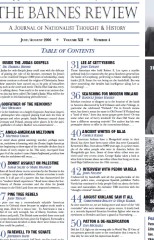 4 INSIDE THE JUDAS GOSPELS DR. HARRELL RHOME Was Judas the only disciple Jesus could trust with the delicate task of playing the role of his betrayer, necessary for Jesus’s plan to be crucified? Despite 2,000 years of scholarship, many questions continue to shroud the origins of Christianity. Some of these mysteries have turned out to be grist of best-sellers today, such as the novel and movie The Da Vinci Code that everyone is talking about. Now much in the news is an ancient document that has been called The Gospel of Judas. What will be the next episode in this fascinating phenomenon? . . . 9 GODFATHER OF THE NEOCONS? DAN MICHAELS Here is the lowdown on a largely forgotten American imperialist philosopher who enjoyed playing God with the lives of Europeans and other people. Isaiah Bowman created chaos in Germany and Poland, among other places. Is he the spiritual godfather of today’s Bushite neo-conservatives? . . . 15 ANGLO-AMERICAN MELTDOWN MATTHIAS CHANG Never mind about global warming; another, perhaps more urgent, meltdown is looming, with the Zionist Anglo-American empire beginning to show signs of the inevitable decline that is the doom of every empire so far. This story, excerpted from Chapter 6 of the author’s tome Future Fastforward, predicts how and why the meltdown will occur. . . . 20 ZIONIST ASSAULT ON PALESTINE SAMAR SALEH & MARK FRANKLIN We have all heard about recent atrocities by the Zionists in the Jenin refugee camp and elsewhere. Zionist terrorism is nothing new. It is all part of a pattern that has characterized the entire “modern Israeli experience.” Read more about the horrid history of Zionist terrorism and the drive for Jewish supremacy in the Holy Land from two seasoned newsmen. . . . 27 PINE TREE REBELS JOHN TIFFANY The pine tree was a tremendously valuable American resource in Colonial times because its mighty trunk made a strong mast, ideal for a man-o’-war. To Americans it was a symbol of not only strength, but of liberty, freedom, independence and profit. The British navy needed these trees and the crown demanded the best pines for England. Eventually a band of Americans decided to show there were limits to how far they could be pushed. . . . 30 FAREWELL TO THE SENATE JEFFERSON DAVIS In this great American speech, Jeff Davis, the first (and, so far, only) president of the Confederacy, was still a member of the U.S. Senate. In bidding them adieu on a cold winter day in 1861, the future president, who was essentially opposed to secession and little knew what the future would hold, explains why it was his patriotic duty to depart from the central government to better serve his sovereign state of Mississippi. . . . 31 LEE AT GETTYSBURG JOHN TIFFANY Those historians who hold Robert E. Lee upon a marble pedestal look for reasons why the great Southern general lost the battle of Gettysburg, preferring to blame dashing cavalry leader J.E.B. Stuart for not being on the battlefield. But was there something else besides bad intelligence ailing Lee at Gettysburg? . . . 36 SEARCHING FOR MODERN VINLAND RANDULF JOHAN HANSEN Scholars continue to disagree as to the location of the lands in America discovered by Leif Eriksson and other Vikings, in particular the celebrated “Vinland.” Vin in French means wine, but does it mean the same in Old Norse? If Vinland was a “land of wine,” does that mean grapes grew there? Or was some other sort of berry involved? Or does Old Norse vin have a different meaning entirely? The author has his own persuasive theory to offer in the contentious debate. . . . 40 ANCIENT WHITES OF BAJA GEORGE KADAR Most American Indians have a Mongoloid strain in their blood, but there have been some tribes that were Caucasoid. Kennewick Man, from about 9,000 years ago, is a prime example of the white people who were in America before the Mongoloids got here. Some of these white tribes even survived until very recent times. George Kadar takes a look at what little is known about two white tribes that hung on in isolated Baja California into the 19th century. . . . 42 INTERVIEW WITH PEDRO VARELA JOHN NUGENT Undeterred by handcuffs and all the paraphernalia of the modern police state, courageous Spanish publisher Pedro Varela has continued to help people find out about the holocaust and nationalism. An exclusive TBR interview with the “thought criminal” himself. . . . 44 AUGUST KUKLANE SAW IT ALL CHRISTOPHER BOLLYN & HELJE KASKEL As time marches on, we are losing more and more of the “old comrades” who were witnesses to great events. A timely look at a recently departed Estonian freedom fighter who was an eyewitness to Dresden and later a guard at Nuremberg. . . . 50 PATTON & DE-NAZIFICATION DAN MICHAELS Did the U.S. fight on the wrong side in World War II? One of our greatest generals came to the conclusion that it was so. Is that why he met with his mysterious death? . . . 56 HITLER FOR 1,000 YEARS GEN. LEON DEGRELLE Hitler intended that his system should last for hundreds and hundreds of years. How different would our world today be, if he had been more successful? Here is more, exclusive to TBR, from Leon Degrelle, the noted Belgian leader. . . . ...