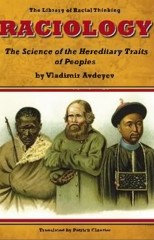 Foreword to Raciology By Kevin MacDonald. Professor of Psychology California State University-Long Beach. Long Beach, CA 90840 kmacd@csulb.edu. Psychologist J. Philippe Rushton once mentioned that science moves forward, continuing to gather data and refine its theories, but with one important exception: a century ago, there was a robust Darwinian science of race differences in a variety of traits, from differences in head shape and cranial capacity, to differences in intelligence and behavioral restraint. However, this young science was nipped in the bud, but not because it was displaced by a new and powerful, empirically-based theory — the demise of racial science came about because of intellectual movements, which were dominated by ethnic Jews and tightly linked to the political left — the topic of my book, The Culture of Critique: An Evolutionary Analysis of Jewish Involvement in 20th- Century Intellectual and Political Movements.1 This was a case of science being replaced by ideology — an ideology designed to oppose the idea that Europeans were in any way unique or superior to other human groups; an ideology designed to advance the interests of ethnic outsiders, who have their own strong sense of biological uniqueness and superiority. Ultimately, it was an ideology that rationalized the decline of Europeans and their culture — something that we see all around us today. The new ideology decreed that humans are infinitely malleable creatures of their culture, and eventually became defined by the view that race does not exist at all. Franz Boas, the high priest of the new cult, was a strongly identified Jew and committed leftist. His famous study purporting to show that skull shape changed as a result of immigration from Europe to America was a very effective propaganda weapon in the cause of eradicating racial science. Indeed, it was intended as propaganda. Based on their reanalysis of Boas's data, physical anthropologists Corey Sparks and Richard Jantz do not accuse Boas of scientific fraud, but they do find that his data does not show any significant environmental effects on cranial form as a result of immigration.2 They also claim that Boas may well have been motivated by a desire to end racialist views in anthropology: While Boas never stated explicitly that he had based any conclusions on anything but the data itself, it is obvious that he had a personal agenda in the displacement of the eugenics movement in the United States. In order to do this, any differences observed between European- and U.S.-born individuals will be used to their fullest extent to prove his point.3 As a result of the massive success of this onslaught, the science of race differences languished. Whatever truths it had uncovered were forgotten. In Raciology, Vladimir Avdeyev resurrects the vast tradition of research on the physical anthropology and psychology of race differences. His book is an exhaustive summary of research in the field, dating back to the 18th century to the present. It includes a great many summaries of the research of individual scientists, many of whom have been virtually forgotten. But it is far more than a compendium of research. It also vigorously defends the idea that “the problem of race is the nerve center of world history.” It is intended, therefore, to influence how people think about race in the context of history and current events. Several themes recur throughout Raciology. Race is overwhelmingly the result of biological inheritance, not cultural programming. Beginning with Count Joseph Arthur de Gobineau, this body of theory and research proposed that the biologically based racial characteristics of Whites have led them to be originators of superior cultures. The White race evolved in the north of Europe and spread south and east, to become the main force behind the ancient cultures of Greece, Rome, Egypt, India, Persia, and the Hittites. ...