Berresford Ellis Peter - A brief history of the Celts 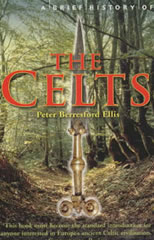 Preface. At the start of the first millennium BC, a civilisation which had developed from its Indo- European roots around the headwaters of the Rhine, the Rhône and the Danube suddenly erupted in all directions through Europe. Their advanced use of metalwork, particularly their iron weapons, made them a powerful and irresistible force. Greek merchants, first encountering them in the sixth century BC, called them Keltoi and Galatai. Later, the Romans would echo these names in Celtae, Galatae and Galli. Today we generally identify them as Celts. The ancient Celts have been described as ‘the first Europeans’, the first Transalpine civilisation to emerge into recorded history. At the height of their greatest expansion, by the third century BC, they were spread from Ireland in the west across Europe to the central plain of what is now Turkey in the east; they were settled from Belgium in the north as far south as Cadiz in Spain and across the Alps into the Po valley. They not only spread along the Danube valley but Celtic settlements have been found in southern Poland, in Russia and the Ukraine. Recent evidence has caused some academics to argue that the Celts were also the ancestors of the Tocharian people, an Indo-European group who settled in the Xinjiang province of China, north of Tibet. Tocharian written texts survive from the eighth to ninth centuries AD. That the Celts left a powerful military impression on the Greeks and Romans there is little doubt. In 475 BC they defeated the armies of the Etruscan empire at Ticino and took control throughout the Po valley; in 390 BC they defeated the Romans and occupied the city for seven months – it took Rome fifty years to recover from that devastating disaster; in 279 BC they invaded the Greek peninsula, defeating every Greek army which was sent against them before sacking the Greek holy sanctuary of Delphi and then returning back to the north. Some of them crossed into Asia Minor and established a Celtic kingdom on what is now the central plain of Turkey. So respectful of the Celts’ fighting ability were the Greeks that they recruited Celtic units into their armies, from Epiros and Syria to the Ptolemy pharaohs of Egypt. Even the fabulous Queen Cleopatra had an élite bodyguard of 300 Celtic warriors which, on her defeat and death, served the equally famous Herod the Great and attended his funeral obsequies in 4 BC. Hannibal used Celtic warriors as the mainstay of his army and, finally, after the conquest of their ‘heartland’ Gaul, the Celts even served the armies of their arch-enemy, Rome. Yet warfare was not their only profession. They were basically farmers, engaging in very advanced agricultural techniques whose methods impressed Roman observers. Their medical knowledge was highly sophisticated, particularly in the practice of surgery. As road builders they were also talented and it was the Celts who cut the first roads through the previously impenetrable forests of Europe. Most of the words connected with roads and transport in Latin were, significantly, borrowed from the Celts. As for their art and craftsmanship, in jewellery and design, they have left a breathtaking legacy for Europe. They were undoubtedly the most exuberant of the ancient European visual artists, whose genius is still valued and copied today; their masterpieces in metalwork, monumental stone carvings, glassware and jewellery still provoke countless well-attended exhibitions throughout the world. ...