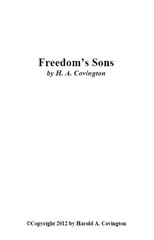 Acknowledgements. It has been said that any novel which does not require at least two years of the author’s life to produce is not worth reading. This one required just that. I began it on Thanksgiving Day of 2010, and put the last finishing touches on the manuscript exactly two years later, on Thanksgiving Day of 2012, a little more than two weeks after the date of what will probably be the last American national election in the traditional sense of the term. It is my belief that November 6th, 2012, marked the transition of the United States to a one-party state, and that history will record that date as the end of the U.S.A. as we today understand the concept. Like September 4th, 476—the day when the last Roman emperor abdicated his throne and which scholars officially assign as the day Rome finally fell—no one noticed at the time. But a once-great empire has fallen nonetheless. It would be impossible, as well as dangerous, for me to acknowledge by name everyone who has helped me in the writing and production of this book. We live in a time when we are witnessing the birth of a nascent dictatorship in the United States, and any list of names I entered here would be an invitation to vicious and paranoid victimization of those without whom this book could not have come into being. I will not repay in such a manner the men and women who have given without stint of their time, their money, their proofreading and technical expertise, and their critical assistance in order to make this book a reality. You all know who you are. There is nothing I can say, except thank you. -H. A. Covington Seattle. ...