Covington Harold Armstead - The hill of the ravens 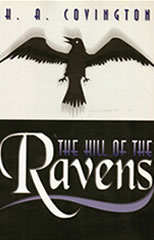 The rebels were all dead by six-thirty in the morning. The summer sun had just risen in the east over the distant, snow-capped mountains of Washington. Pockets of mist nestled in the low ground, and beaded droplets of moisture still clung to the blades of grass and the green leaves on the nearby forest floor. The long sloping hillside glistened with dazzling pinpoints of reflected light from the dewdrops. The echoes of the machine gun fire and the RPG explosions died away, leaving only the hanging reek of cordite and the metallic smell of hot brass from thousands of ejected cartridge casings. Black smoke rose into the still morning air from the burning vehicle hulks on the road, and when a soft breeze sprang up it carried the sizzling stench of burning rubber and charred flesh into the American firing positions. There was a long silence, and then the birds started to sing again. The commanding officer of the ambush scanned the kill zone with his field glasses. Major Woodrow Coleman of the Federal Anti-Terrorist Police Organization was a very black man with thick lips and a bristly, dirty-looking beard of short curly whiskers. He was immensely pleased with what he saw in his binoculars. He knew now that he had been right not to call in air support. The sight of a single helicopter, even high up, would have caused the enemy to abandon their vehicles, break up and head for the timber, where long experience had taught the Americans it was most unwise to pursue them. This way the surprise had been total. The guerrillas in the two vans had been roasted alive when the vehicles exploded from the rocketpropelled grenades and the mines, but the ones in the open truck had managed to roll out with amazing speed and discipline. The only retreat for the rebels from the road and the spitting Federal gun muzzles had been up the rocky slope pre-laid with radiodetonated Claymore mines, and their only cover had been a few scraggly pines. Falling into squads, they had moved swiftly up the hillside with their own weapons blazing, right into the strings of anti-personnel mines that cut them down. Caught off guard even as they had been, Jerry Reb had made a fight of it. From the radio chatter in his earphone the CO knew that some of his own men were down. Even under the sheets of automatic weapons fire and the shredding shrapnel, the partisans had proven to be cool heads and crack shots. “It’s those damned teflon-tipped bullets again, Major!” squawked his chief medic in his ear. “They go through kevlar like a hot knife through butter! Where the hell do they keep getting those damned teflon slugs?’’ Coleman didn’t answer. Right now he didn’t care, such was his savage joy at the carnage, at a lifetime of burning hatred at last fulfilled and slaked, his cup of revenge against the hated white man running over. It looked like the ambush had gotten them all. He could see dozens of the rebels who were down now. not moving, littering the hillside like crimson lumps of meat, twists of dirty laundry splattered in the dirt. “Alpha and Bravo teams, move in! Approach with caution,” he said into his radio mike dangling before his lips. “Stay spaced, don’t lump together, stay alert! Do not assume all of them are dead or disabled. Make sure! Blast anything that moves up there. ...