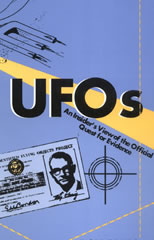 Preface. The United States Air Force had a problem. Its top brass did not consider it a defense or a national security problem. It was a public relations problem. Since "flying saucers" became a part of American lore after Kenneth Arnold's reported sighting in 1947, the demands on the Air Force to check out and tell about reported UFOs had grown through the years. So had criticism of the Air Force's handling of the reports. By 1966, public indignation at Air Force "explanations" - focused then on the "swamp gas" explanation of a multitude of sightings in Washtenaw County, Michigan - became intense enough to create demands for Congressional investigations. The Air Force's public relations people found it necessary to seek assistance to get critics off the Air Force's back. On 30 December 1947, the Air Force had begun formal investigation of what were then called "flying discs" after a flurry of sighting reports followed Kenneth Arnold's experience. Its first program was code-named Project Sign. After a year of study, the staff of Project Sign prepared an "Estimate of the Situation" and sent it, supposedly classified "Top Secret" to Air Force Chief of Staff, General Hoyt S. Vandenberg, in July of 1948. ...