Dollmann Eugen - With Hitler and Mussolini 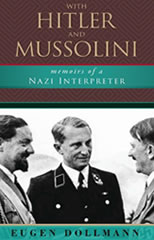 Foreword by David Talbot. SS COLONEL EUGEN DOLLMANN was not one of the most central figures in Hitler’s inner circle, but he certainly was the most dishy. As the Rome-based interpreter who linked together the German-Italian axis during World War II, he had unique access to the Führer and his top henchmen, as well as the decadent milieu surrounding Mussolini. He was not as morally depraved as those he served, but his cynicism made him capable of accommodating himself to their baroque evils. Dollmann was a “self-serving opportunist who prostituted himself to fascism.” That was the succinct historical judgment of Holocaust scholar Michael Salter. And yet, precisely because he did not drink fully from Hitler’s poisoned chalice, Dollmann was able to observe his masters from a droll distance like the world-weary characters played by George Sanders. This perspective - intimate, but detached - makes his memoirs an utterly fascinating and disturbing reading experience. Dollmann’s companion volumes caused something of a sensation when they were published in Europe under the original titles Call Me a Coward (1956) and The Interpreter (1967). But they have long been forgotten, until now. With America’s descent into its own bizarre nightmare, the discovery of these lost memoirs seems exquisitely well-timed. The inner world of fascist power that Dollmann reveals is both all too human and frighteningly monstrous. The man who enabled Hitler and Mussolini to communicate with each other was a closeted homosexual, serving a regime that sent thousands of gay men to the gas chambers. This is just one of many ironies that defined Eugen Dollmann. To make things even stranger, Dollmann suggests that Hitler’s own fondness for boyish-looking men was a well-known secret in certain German circles during his rise to power. In one of the most memorable passages of the volumes, Dollmann recalls his frantic shopping sprees in Rome with Eva Braun, Hitler’s companion. “She loved crocodile in every shape and form, and returned to her hotel looking as if she had come back from a trip up the Congo rather than along the Tiber.” Dollmann was fond of the sweet and simple Braun, who confided her sad life to him. She confessed to him there was no sexual intimacy between her and the Führer. “He is a saint,” she told her shopping companion. “The idea of physical contact would be for him to defile his mission.” ...