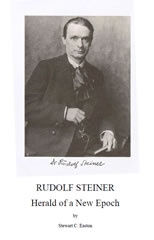 Chapter 1. INTRODUCTORY. When Rudolf Steiner was born in 1861 near the confines of the Austrian Empire, the dominant aspect of Western thought was its materialism, the denial by so many thinkers not only of the truths of traditional Christianity, but of any divine activity whatever in earthly affairs. In that year Charles Darwin’s masterpiece The Origin of Species, which purported to explain mankind’s evolution in wholly material terms, was beginning its meteoric success, while Karl Marx’s teachings seemed to offer a convincing and satisfying explanation of mankind’s history without having to resort to any hypothesis of divine purpose or intervention. Auguste Comte’s philosophy of positivism, which attempted to show how man had thrown off old superstitions in order to arrive at an enlightened understanding of the world and man in material terms without the aid of religion, was making new converts every day among mid-nineteenth century philosophers and scientists. Arthur Schopenhauer, deeply pessimistic, had published his epochmaking work The World as Will and Idea, in which he tried to demonstrate the meaninglessness of human evolution, a philosophy soon to be adopted as the point of departure for his own work by Friedrich Nietzsche, a battler, as Rudolf Steiner was later to call him, against his time. Nietzsche’s whole life work, indeed, was a long cry of anguish against the ideas of his day, which he was not able to refute but could not accept with equanimity—his anguish leading him ever more deeply into a kind of nihilism, and above all into that opposition to Christianity that was characteristic of his latest work. Such was the cultural and intellectual atmosphere of Europe when Rudolf Steiner was born. But from his earliest childhood he was aware of the reality of the invisible or spiritual world, and it was for that reason impossible for him to share the skepticism, agnosticism and materialism of his age. He knew that all reality was not encompassed within the visible earthly world and thus never experienced an anguish comparable to Nietzsche’s. His problem lay elsewhere. Once he had discovered that other men did not possess his spiritual vision he might have conceived it to be his task to convey to others what he himself perceived in the world of spirit, leaving it to those others to convince themselves as best they could of his veracity, and make what they could of his revelations. The revelations themselves they would in effect have been required to accept on faith, or reject because they could not bring themselves to believe them. In essence this was the path taken by seers of earlier epochs, men like Jacob Boehme or Emanuel Swedenborg, who spoke or wrote directly of their spiritual experiences and ”revealed” what they had perceived in the spiritual worlds hidden from the rest of mankind. ...