Edgell William - Does the Earth rotate ? No ! 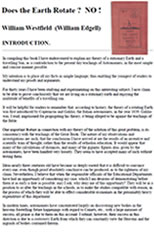 Introduction. In compiling this book I have endeavoured to explain my theory of a stationary Earth and a travelling Sun, as a contradiction to the present day teachings of Astronomers, in the most simple and concise manner possible. My intention is to place all my facts in simple language, thus enabling the youngest of readers to understand my proofs and arguments. For thirty years I have been studying and experimenting on this interesting subject, I now claim to be able to prove conclusively that we are living on a stationary earth and enjoying the multitude of benefits of a travelling sun. It will be helpful for readers to remember that, according to history, the theory of a rotating Earth was first introduced by Copernicus and Galilio, the Italian astronomers, in the year 1639, Galilio was, I read, imprisoned for propogating his theory, it being alleged to be against the teachings of the Bible. One important feature in connection with my theory of the solution of this great problem, is its consistency with the teachings of the Great Book. The nature of my observations and investigations are such, that the conclusions I have arrived at are the results of an inventive and scientific train of thought, rather than the results of orthodox education. It would appear that many of the calculations of distances, and many of the gigantic figures also, given by the astronomers, have been handled very loosely. They seem to have accepted many of such without testing them. Ideas nearly three centuries old have become so deeply rooted that it is difficult to convince every one, even though proof absolutely conclusive can be produced, as to the rightness of my claim. Nevertheless, I believe that when the responsible officials of the Educational Departments have had an opportunity of considering my case, which I am desirous of demonstrating before them at as early a date as possible, may I ask, why deny me of this opportunity? They will be in a position to so alter the teachings in the schools, as to make the studies compatible with reason, in the process of which they will be able to effect considerable economies in the presumably heavy expenditure of this department. In modern times, astronomers have concentrated largely on discovering new bodies in the heavens foretelling future happenings with regard to Comets, etc., with a large measure of success, all praise is due to them on this account. I submit, however, their success in this direction is due to a stationary Earth from which they can constantly view the Heavens and the ingraids of bodies contained therein. ...