Fisher Sidney George - The true history of the american revolution 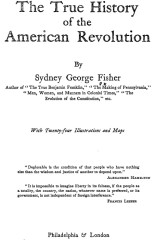 Preface. The purpose of this history of the Revolution is to use the original authorities rather more frankly than has been the practice with our historians. They appear to have thought it advisable to omit from their narratives a great deal which, to me, seems essential to a true picture. I cannot feel satisfied with any description of the Revolution which treats the desire for independence as a sudden thought, and not a long growth and development, or which assumes that every detail of the conduct of the British government was absurdly stupid, even from its own point of view, and that the loyalists were few in numbers and their arguments not worth considering. I cannot see any advantage in not describing in their full meaning and force the smuggling, the buying of laws from the governors, and other irregular conduct in the colonies which led England to try to remodel them as soon as the fear of the French in Canada was removed. Nor can I accept a description which fails to reveal the salient details of the great controversy over the rather peculiar methods adopted by General Howe to suppress the rebellion. This controversy was a part of the Revolution. It involved the interesting question of Howe's instructions from the ministry and the methods which the ministry intended to use with the revolted colonists. ...