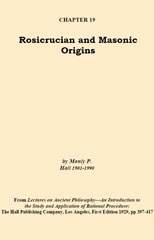 Freemasonry is a fraternity within a fraternity—an outer organization concealing an inner brotherhood of the elect. Before it is possible to intelligently discuss the origin of the Craft, it is necessary, therefore, to establish the existence of these two separate yet interdependent orders, the one visible and the other invisible. The visible society is a splendid camaraderie of "free and accepted" men enjoined to devote themselves to ethical, educational, fraternal, patriotic, and humanitarian concerns. The invisible society is a secret and most august fraternity whose members are dedicated to the service of a mysterious arcanum arcanorum.Those Brethren who have essayed to write the history of their Craft have not included in their disquisitions the story of that truly secret inner society which is to the body Freemasonic what the heart is to the body human.In each generation only a few are accepted into the inner sanctuary of the Work, but these are veritable Princes of the Truth and their sainted names shall be remembered in future ages together with the seers and prophets of the elder world. Though the great initiate-philosophers of Freemasonry can be counted upon one's fingers, yet their power is not to be measured by the achievements of ordinary men. They are dwellers upon the Threshold of the Innermost, Masters of that secret doctrine which forms the invisible foundation of every great theological and rational institution. The outer history of the Masonic order is one of noble endeavor, altruism, and splendid enterprise; the inner history, one of silent conquest, persecution, and heroic martyrdom. The body of Masonry rose from the guilds of workmen who wandered the face of medieval Europe, but the spirit of Masonry walked with God before the universe was spread out or the scroll of the heavens unrolled. The enthusiasm of the young Mason is the effervescence of a pardonable pride. Let him extol the merits of his Craft, reciting its steady growth, its fraternal spirit, and its worthy undertakings. Let him boast of splendid buildings and an ever-increasing sphere of influence. These are the tangible evidence of power and should rightly set a-flutter the heart of the Apprentice who does not fully comprehend as yet that great strength which abides in silence or that unutterable dignity to be sensed only by those who. have been raised into the contemplation of the Inner Mystery. ...