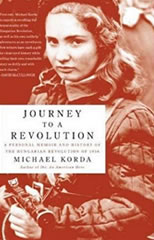 Author : Korda Michael
Title : Journey to a revolution A personal memoir and history of the Hungarian Revolution of 1956
Year : 2006

Preface. Nothing presents more difficulties than writing an objective account of a great event in which one has participated oneself. Being objective about the Hungarian Revolution of 1956 is hard enough to begin with - it is a kind of modern David and Goliath story, except that Goliath won - but harder still for somebody who participated in it, like myself, and who was present at some of the major moments. The abbé Sieyès, when asked what he did during the French Revolution, replied, Je l’ai survécu (“I survived it”). I suppose I can, at the very least, make the same claim, but I also witnessed demonstrations of almost unbelievable courage, of shameless political betrayal, and of the kind of unrestrained military brute force and violence against civilians of which the twentieth century was so full, and which do not seem to have ended so far in the early years of the twenty-first. Although there is no doubt that the events of October 1956 constituted a revolution, they swiftly became something else : a war. ...