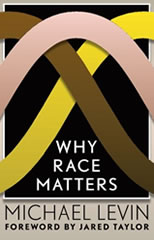 Foreword by Jared Taylor. I first became aware of Michael Levin in 1988 when I read his book, Feminism and Freedom. It is a marvelous demonstration by a professor of philosophy doing what philosophers are supposed to do: apply the tools of rigorous thought to important and even controversial questions. I was so impressed by the quietly relentless way Prof. Levin demolished fashionable feminist arguments that, for the first time in my life, I wrote a fan letter to an author. I got a reply - typed by hand, as letters were in those days. It was so pleasant and informative that I saved it. On rereading it now, I am struck by this passage: “I’ve toyed with the idea of a second edition. As you shrewdly surmised, the whole experience of writing F&F has been an extremely unpleasant one - made bearable by letters such as yours - and I’m not sure I want to devote more of my life to such a thankless task as criticizing feminism.” In fact, over the years, Prof. Levin has devoted a great deal of his life to the thankless task of criticizing not just feminism but other fashionable ideologies with equally shrill and powerful defenders. Prof. Levin is one of the very, very few people in America willing to write unpalatable truths without regard for the consequences. Those consequences have generally been, as he described the experience of writing F&F, unpleasant. ...