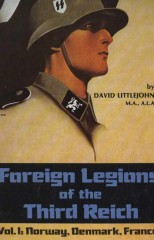 This is the first volume of a series devoted to an almost-virgin field of military research - the uniforms, ranks, flags, medals and other insignia of the foreign volunteers in Germany's military and para-military forces during the Second World War, also those of the collaborating political parties of occupied Europe (from which, of course, many of these volunteers came). Since this is, clearly, far too much to attempt to convey m a single title, the general convenience heading chosen for the series has been simply "The Foreign legions". This initial volume deals with Norway, Denmark and France, and will be followed very shortly by one dealing with the other parts of western Europe- Holland, Belgium, Italy and Spain. Central and southern Europe will have a volume of their own, as will the " Ostvolk", that is to say the volunteers from eastern Europe, the Baltic states and Finland. The author hopes that the information therein will be useful to collectors of militaria, war-garners, military modellers, and students of the history of World War II generally. Few things can be more frustrating for the collector, or would-be collector, than to have in his possession an interesting-looking item for which he can find no identification. He seeks in vain for some published source to answer his questions, "What is it, what country is it from, what was it for?" This series may, hopefully, supply many of the answers. lt would, however, be a foolhardy writer who would claim to know all the answers. The present author would therefore welcome any additional information or corrections relating to the contents of each volume after it appears. The publisher will, if sufficient material is forthcoming, add a supplement to the final volume in the series thereby bringing the whole up to the fullest state of currently available knowledge. ...