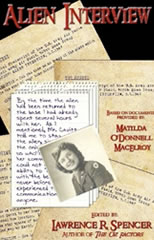 Introduction : The Mystery of UFOs and Extraterrestrials. If you have studied UFO phenomena at all, you are already familiar with the infamous Orson Welles radio broadcast of "War of the Worlds, And The Invasion from Mars" 1 (Footnote) on Oct. 30, 1938. This fictitious radio dramatization of an invasion of Earth by "aliens" incited a global UFO and extraterrestrial hysteria long before the UFO crash near Roswell, N.M. in 1947. During the past 60 years, since the alleged Roswell crash, there have been tens of thousands of reported UFO sightings. A global hysteria has emerged from "evidence" of what is presumed to be extraterrestrial phenomenon. Concurrently, the unrelenting denial of this phenomenon by the U.S. government has precipitated an uninterrupted flurry of accusations, counteraccusations, cover-up conspiracy theories, lunatic fringe speculations, "scientific investigations", etc., etc., ad nauseam, and a growing multitude of similar alleged "close encounters". My first thought when I received the package of documents from Mrs. MacElroy was: "This is just another set of Majestic-12 documents". 2 (Footnote) I am referring to a "mysterious package" reportedly received by mail in 1984 shortly after the death of the last surviving member of the socalled "Majestic-12" committee, alleged to have been organized by President Harry Truman shortly after the Roswell incident in 1947. There are several similarities to the "Majestic-12" documents and the package I received from Mrs. MacElroy. In the case of the former, an envelope was sent from an anonymous sender with no return address. It contained an undeveloped roll of film. That's all. On the roll of film were photos of documents that were assumed to be authentic by the recipient and his colleagues whose vested interest, i.e. livelihood, depend heavily on attracting public notice and credibility to themselves as "leading authorities" on the subject of UFO phenomena. They have worked relentlessly since then to discover "proof" that the documents are authentic. Of course, government agencies deny everything alleged in the documents and anything having to do with the subject of extraterrestrials in general. ...