Rendall Gerald H. - The cradle of the Aryans 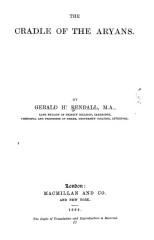 Preface. The following Essay is a paper originally communicated, necessarily in abridged form, to the members of the Liverpool Literary and Philosophical Society, and is an attempt to give a clear account of present controversies regarding the origin, local and racial, of the Aryan stock. It makes no claim to original discoveries in the field of language; but it embodies the results of somewhat extensive reading, mainly in German authorities ; it gives a much fuller account than as yet exists in English of the latest Continental theories ; and it presses some conclusions and inferences to what appears to me their legitimate issue, more closely than has been done by previous writers. I give it separate publication, thinking it may be of use to other students in the field of language. The better to fulfil this end, in the sections dealing with vocabulary I have systematically inserted in brackets some familiar representative of the term discussed ; where this is not done, it is to be understood that the English word itself represents the stem in question. This, with the comparative tables introduced, will make it easy to check etymological statements, without uncertainty and loss of time. To gain compactness, I have refrained from not a few tempting digressions, and confined myself to categorical statement, with or without supporting reference in the notes. ...