Report on the 1980's disturbances in Matabeleland and the Midlands 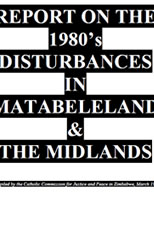 Author : Catholic Commission for Justice and Peace in Zimbabwe
Title : Report on the 1980's disturbances in Matabeleland and the Midlands
Year : 1997

Preface. The writing of the current report has been possible only because Zimbabwe is currently enjoying a period of stability and national unity which did not exist ten years ago. The country now known as Zimbabwe has, in the last hundred years, had a history marred by internal conflicts: the current state of peace in the nation is unprecedented. The signing of the Unity Accord in December 1987 brought an end to the disturbances which this report documents. In 1990, the lifting of the Emergency Powers Regulations, which had been in existence since the Rhodesian Government first instituted them in 1965, did away with the Zimbabwe Government's extra legal powers, many of which had allowed for the infringement of basic human rights. Zimbabwe's current human rights record, while still not perfect, is better than it has ever been since Independence in 1980. The disturbances documented in this report also need to be placed in a historical context. Zimbabwe did not come to Independence easily: the decade which preceded Independence was one which saw the fighting of an increasingly violent civil war, a war which cost many thousands of civilian lives and caused untold hardship and suffering. While the full number of casualties will never be known, it has been estimated that at least 30 000 people died countrywide, although real numbers of dead could be more than double this figure. Most of these casualties were in the north and eastern regions of Zimbabwe, or in external training and refugee camps in Zambia and Mozambique, although there was no region of the country that was not severely affected by the Liberation War. As in any conflict, damage cannot be measured in deaths alone: tens of thousands of Zimbabweans were displaced from their rural homes in northern and eastern Zimbabwe into "Protected Villages" (PVs), run by the Rhodesian Defence Forces. The relocation of people into these PVs was done in an effort to prevent rural civilians from feeding, and providing intelligence to, the guerrilla armies: conditions were cruel, and led to massive human rights abuses, including wide-spread malnutrition. The PV policy was combined with "Operation Turkey", the code name given to the policy of destroying crops in rural areas in an attempt to cut the guerrillas off from their food supplies. Needless to say, such a policy also impacted adversely on innocent civilians, exacerbating the starvation already being caused by life in the PVs. The placing of people in PVs was a form of state organised violence against civilians: no doubt many, especially children raised in such places, still suffer the mental consequences of this experience. Thousands of civilians were also detained indefinitely without trial during the 1970s, including many of those at the forefront of the nationalist movements, ZANU and ZAPU. President Robert Mugabe and Vice President Joshua Nkomo were both detained for many years. Thousands of young men and women who left the country to train as freedom fighters also sacrificed their own opportunities to gain an education, while others ended the war with permanent physical or mental disabilities. While there are legal mechanisms in place through which war veterans can claim help and compensation, not all ex-fighters are aware of this, or know how to take advantage of the law. For many hundreds, possibly thousands, of war veterans and their families, the hardship continues. It is also acknowledged that since Independence, Matabeleland and the Midlands are not the only parts of the country to have suffered as the result of internal disturbances. In the late 1980s, there were human rights abuses in the eastern districts of the country, as a result of MNR bandit activity. The South African-backed, Mozambique-based MNR bandits were responsible for serious human rights abuses, particularly in Mount Darwin in the north east of Zimbabwe and in Chipinge in the south east, from 1988 onwards. While these abuses involved only small areas of the country, their effects were extremely harsh for those civilians involved. Scores of innocent people in this region were murdered, mutilated, or had to live with daily insecurity as a result of this conflict. ...