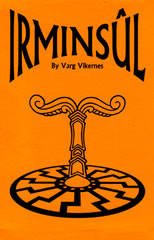 These days, there is great uncertainty surrounding what Irminsûl really was, and what purpose this god-pillar served. We have learned that the Saxons worshipped Irminsûl as a god. We know that they sacrificed to this pillar and held things1 around it. However, the scope of our knowledge ends there. We are unable to learn more about Irminsûl by relying on modern books. The Saxons were a common name for a series of Germanic tribes residing in the northern region of what is now called Germany. Most likely, they received this name due to their use of some uniquely characteristic swords, which were called sax. This is a short, single-edged sword; or a large and heavy knife. The word saks (scissors) in modern Norwegian derives from this. The binding factor among these tribes was a shared belief that Irminsûl was holy. They believed that without this pillar, the sky would come crashing down upon their heads. To show them that they were wrong, Karl2 cut down the tree in 772. The pillar fell, but the sky did not. The Saxons, during this time, had lost all of their chieftains. Karl had murdered approximately 5,000 Saxon chieftains by tricking them into attending negotiations unarmed. The remaining Saxons subsequently gave up their fight against the Christians. However, the torch was then passed on to the tribes of Scandinavia. Thus we arrive at the era referred to as the Vikingages today. This epoch witnessed the Scandinavians sailing out and battling desperately against the supreme Christian power. The Saxons are portrayed as very primitive in modern films and books. Their religion consisted of worshipping a tree, which they called Irminsûl. They prayed to this pillar, sacrificed to it and danced around it. In movies, we see dirty, half-naked barbarians who knelt around the tree and howled in fear when it was chopped down. After that, they become convicted that Jesus is the right way, and allow themselves to be christened. Such derogatory films and books about Irminsûl and the Saxons are – of course – created by Christians and Jews. I could write a bit about this propaganda tool and what purpose it serves, but it is probably unnecessary. I will simply say that these depictions are not born solely from their intentional, malicious dishonesty, but from genuine ignorance as well. For they have never understood what Irminsûl really was, or why this tree was so important to the Saxons. Around the year 850, Rudolf of Fulda described Irminsûl as Universalis columna, quasi sustinens omnia3. The pillar upheld the world and prevented the sky from falling. Of course, this sounds ridiculous to modern man. We do not believe that the sky can come crashing down on our heads; but can it not ? ...