Webster Nesta Helen - The secret of the Zodiac 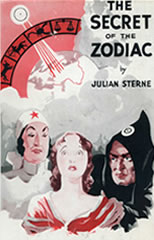 Chapter 1. A political débutant. IT was a warm night in May, and Sir Alfred and Lady Frensham were giving one of their dull dinners at the House of Commons. There was really no reason why their parties should be dull. Sir Alfred, Conservative member for Westborough, was a cheery man, still on the right side of fifty, very popular in the county, and particularly in the hunting field, whilst Lady Frensham, with her charming smile and attractive clothes, had made herself beloved by every class of the constituency. Neither were the guests at her parties altogether of a boring kind. But they were badly sorted . Living in a perpetual whirl of political and social functions, Lady Frensham had no time to consider which of her guests would be congenial to each other . So, when giving dinners, she had fallen into the habit of ticking off a list of the people who were " owed invitations " and then arranging them round the table as she would have played a hand of cards, following the same suita duke's daughter next to a marquis, a baronet next to a knight's widow, a plain captain next to an untitled spinster, and so on. ...