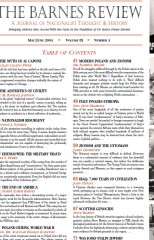 5 THE MYTH OF AL CAPONE 19 MICHAEL COLLINS PIPER For all the ink that has been spilled on the life and times of Al Capone, one thing has been notable by its absence, namely his connection with the true “boss of bosses,” Meyer Lansky. This long suppressed connection changes radically the nature of Capone’s regime in Chicago. . . . 9 THE AESTHETICS OF CIVILITY DR. M. RAPHAEL JOHNSON Art is the great “neglected science” of nationalist criticism. It is the window to the soul of a specific nation or people, telling us quite a bit about its tradition and collective life. The modern world, however, has so distorted humanity as to destroy its art. Decadence in aesthetics is a direct reflection of modernity. . . . 15 NATIONALISM RESURGENT KENNETH J. SCHMIDT For all the pessimism travelling in rightist circles today, there might be room for some hope. Today, it seems, despite massive propaganda blitzes and official suppression, nationalismas political praxis is on the march.All the sitcoms and controlled news “documentaries” are not capable of destroying the profoundly natural attachment of men to their ethnos. . . . 19 EISENHOWER: THE MILITARY FRAUD ALEX S. PERRY Despite the organized worship of Ike oozing from the mouths of mindless Republicans and “conservatives,” the facts paint quite a different picture of the general. In reality, Eisenhower was a leftist, a drunk and a military incompetent, as General George Patton consistently maintained. Even the English did not trust Ike, regardless of his “infectious grin.”. . . 25 THE END OF AMERICA DR. HARRY ELMER BARNES TBR’s namesake here writes a devastating review of a major apologetic work for the Roosevelt administration. Here, Barnes lays out the argument that FDR knew of the attack on Pearl Harbor and refused to tell Kimmel and Short.This essay has not become stale, but rather it remains as the standard by which all work on the Pearl Harbor tragedy is measured. In many ways, this essay is the summary of the entire critique of Revisionism on the FDR fan club. . . . 37 POLAND DURING WORLD WAR II PROF. DR. ATAULLAH BOGDAN KOPANSKI Some of the worst treatment meted out to Polish Jews did not come from evil nazis or nationalists. The ghetto system of administration was completely in the hands of corrupt Jewish warlords and crime bosses who routinely tortured and killed their own people and especially had a hatred for the Orthodox, from which many rabbis were tortured to death by the Jewish mafia in Poland—incontestable facts denied to this day. . . . 41 MODERN POLAND AND ZIONISM DR. HARRELL RHOME For all the struggles suffered through by the Polish nation in the 20th century, one of themost difficult was the resurrection of the Polish state after World War I. Regardless of that however, Polish Jews wanted nothing to do with it. Their difficult demands and arrogant attitude nearly kept the Polish state from existing at all. Dr. Rhome, an editorial board member for TBR, provides us with some heretofore untranslated documentation on the Jewish role in fighting Polish nationalism. . . . 49 ITALY INVADES ETHIOPIA GEN. LEON DEGRELLE One of the most laughable of all the mockeries of justice meted out by the so called League of Nations prior to World War II was their “condemnation” of Italy’s invasion of Ethiopia. Now, one needn’t be partial to foreign conquests to laugh at the Great Powers’ hypocritical “condemnation” of Italy’s move against the ancient African state while they themselves held colonial empires that totalled hundreds of millions of subjects. Many lessons may be learned here about the intricacies of global politics. . . . 59 ZIONISM AND THE OTTOMANS JAMES CROWHURST The Ottoman empire is very difficult to defend. However, there is a substantial amount of evidence that her downfall was not exactly a natural repose, but rather the deliberate result of internal subversion. The Young Turk movement was purely Jewish and Masonic, as this expert on such intrigues presents. . . . 63 IRAQ: 7,000 YEARS OF CIVILIZATION JOHN TIFFANY A Chinese thinker once compared America to a towering weed, springing up in season, only to soon topple over. Now America plans to “civilize” Mesopotamia. Here’s a look at the Land Between the Two Rivers, which has known highlyadvanced civilization for eons. . . . 67 SCOTTISH GENOCIDE STEVE MARTIN In the long history of British atrocities against colonial subjects, patriotic author Steve Martin, no stranger to TBR, details the ideological justification for the forced removal of Scottish roman Catholics fromthe highlands, destroying a culture and providing more evidence for British genocide in the region. . . . 71 WAS JOSEF STALIN JEWISH? R.N. TERRALL Stalin was fromGeorgia, but he was no Georgian.All signs point to his background being Jewish although many refuse to take a good look at the facts. . . . ...