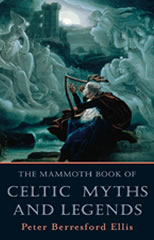 Introduction. The mythology, legends and folklore of the Celtic peoples are among the oldest and most vibrant of Europe. The Celts were, in fact, the first European people north of the Alps to emerge into recorded history. They were delineated from their fellow Europeans by virtue of the languages which they spoke and which we now identify by the term “Celtic”. This linguistic group is a branch of the greater Indo-European family. The Indo- European family of languages encompasses most of the languages spoken in Europe, with a few notable exceptions such as Basque, Finnish, Estonian and Hungarian. The Indo- European group also covers Iran and northern India. Since the old classical language of India, Sanskrit, was identified in the eighteenth century, the concept of linguistic evolution and language relationships has become a science. What this means is that we can see from the linguistic relationship of the Indo- European languages that, at some point in remote antiquity, there was a single parent language, which we call Indo-European, for want of a better designation. This parent language diversified into dialects, as its speakers began to migrate from the geographic location where it was originally spoken. These dialects then became the ancestors of the present major European and Northern Indian language groups – Italic or Latin (now called Romance), Germanic, Slavonic, Baltic, Celtic, Iranian, Indo-Aryan and so forth. Even today, there remain relative forms of construction and vocabulary among the Indo- European languages which are not found in other languages: features which help us identify them as such. Features common to Indo-European include clear formal distinction of noun and verb, a basically inflective structure and decimal numeration. An experiment which demonstrates the relationship is to note the cardinal numbers – one to ten – in each Indo-European language and one will find the same sound values indicating the common parent. Where was the Indo-European parent originally spoken and when did it begin to break up? It is probable, and only probable, that the speakers of the parent tongue originated somewhere between the Baltic and the Black Sea. It also seems probable that the parent tongue was already breaking into dialects before waves of migrants carried them westward into Europe and eastward into Asia. The first Indo-European literature that we have records of is Hittite, a language spoken in what is now eastern Turkey. The Hittites formed an empire which eventually incorporated Babylonia and even briefly exerted authority over Egypt. Hittite writing emerged from 1900 BC and vanished around 1400 BC. Hittite literature survives on tablets written in cuneiform syllabics which were not deciphered until 1916. Scholars argue that the Celtic dialect of Indo-European, which became the parent of all Celtic languages, emerged at about 2000 BC. The Celtic peoples began to appear as a distinctive culture in the area of the headwaters of the Danube, the Rhine and the Rhône. In other words, in what is now Switzerland and South-West Germany. ...