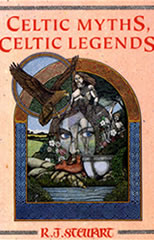 lntroduction. This is not a strictly academic set of translations but a wide-ranging collection of themes from Celtic myths and legends. Some of the tales are translated directly from Irish, Breton or Welsh, and some from Latin or medieval French. Others are written anew from ideas or older tales that embody Celtic myths. The individual items range historically from extracts of early sagas that seem to come from the time ofbron~e weapons (though not written down by Irish monks until the eighth century) to my own twentiethcentury versions of classic Celtic tales. Between these elder and younger voices is a wealth of material from folklore, manuscript, and various books and collections that use Celtic myths in either an academic or an imaginative way. Some of the source texts and academic commentaries are listed in the Bibliography, as are suggestions for further reading into the imaginative power and potential of Celtic tradition. In Celtic Gods, Celtic Goddesses I described some of the major and minor Celtic deities, their attributes, ceremonies and worship, powers and traditions, and the ways in which they might have an inspirational poetic or visionary value for us today. In Celtic Myths, Celtic Legends I have gathered tales that seem to carry the Celtic tradition through time, offering something of the beauty and savagery, the spirituality and sensuousness, of the Celtic ancestors and their modern descendants. There is a tendency in modern revivals of Celtic lore and legend towards prettiness - a falsely romantic approach that conveniently ignores the harsh and often violent nature of Celtic tradition. While I have not hesitated to include some of the more romantic themes, at the same time I have not tried to omit the battles, the vengeance, the cruelty. Without these hard edges, beauty and inspiration can become insipid, and lose its value. ...